Shrewsbury, PA– In a world where seniors are constantly bombarded by fake businesses, money scams and insurance fraud, one York County business owner has found a unique way to put his older clients at ease. 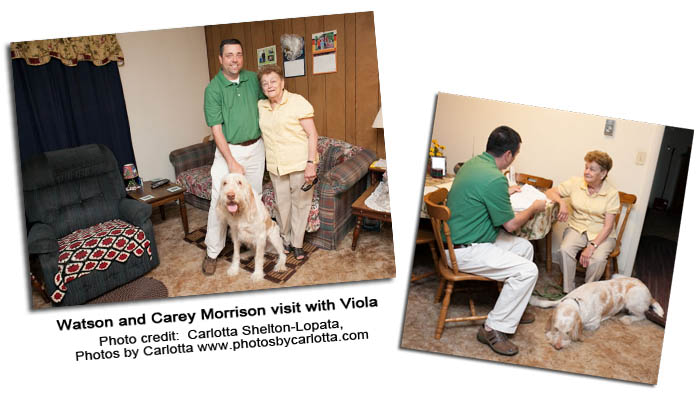 Morrison explains that 17 months ago when his mother was in a hospice center he would take Watson to lessen his family’s anxiety levels. “Watson brought a sense of calm to a stressful situation and a smile to my mother’s face as he would lay quietly and snuggle with her,” he said.

Watson would visit each day and light up the hospice center with his calm, friendly demeanor. “The staff and family members of patients would smile and pet Watson when he came in”, says Morrison.  That’s when a father of another patient asked if Watson might be able to visit his daughter in another room.  “I realized that Watson has a special gift that he could share with others,” he said.

Morrison began to take Watson to senior centers and watched how the dog seemingly enjoyed the smiles and laughter he brought to the residents.  “That’s when I got the idea to take Watson with me on Medicare Insurance appointments.  I noticed that the majority of our Medicare patients were alone and just wanted someone to talk to and listen to them,” said Morrison.

Morrison is convinced that Watson brings joy to his customers.  “He brings smiles, laughter and brightens everyone’s mood.  I visit with each Medicare client a few times a year and the first question they always ask me is if Watson will be along for the visit.  It truly touches my heart to see the joy Watson brings to my senior customers.”